Some Acrylic Nail Tips Worth Trying

A Complete Guide about Diffusers: Types and Benefits

The Best Rejuvenating Face Masks You Need to Try Out

How to Deal with Sensitive Skin While Getting Tanned

Kiara Sky Nail Dip Colors vs. Acrylic Nails – What is the Difference

Get Your Best Gel Nail Polish Manicure at Home

Want to know a little about the history of acne?

Well aren’t you studious. From what we dug up on ehow.com, it appears as though the Ancient Romans led the way as the first civilization to treat acne. In Roman Empire times it was thought that pores could be unclogged and cleansed by mixing sulfur in mineral baths. Sounds smart to me, right? Because this type of cleansing reduced the amount of bacteria-causing acne, it was fairly effective. What’s more, because of sulfur’s dehydrating abilities, oils that clogged the skin were dried out. Although this wasn’t a perfect cure, the mineral water and sulfur treatment did produce good results.

The story of They Hate Pimples begins on a Christmas Day many moons ago. Not for any religious reasons, as I wasn’t opening presents that day, but rather because that was the day the mother of all pimples birthed itself on my face.

What set this pimple apart from other ones I had experienced in my decades on this planet was that it was located dead center on my face. Right between my eyebrows at the top of my nose. Exactly what I didn’t need as I headed to a vacation with some friends and my girlfriend.

Needless to say, my guy friends brutally ripped me for my mega zit… as any friend should. For three days they called me every name in the book. I was a beaten man… until a lightbulb went off in my head. Chicks have concealers, but where is the zit camouflage for guys?  And that’s where it all started.

What I knew was there wasn’t a short-term fix out there for fellas to deal with acne and pimples. An acne treatment that wouldn’t require a dermatologist visit and would have immediate results? Unheard of… until now.

They Hate Pimples has created a kickass zit camouflage for guys .  No more shame and ridicule. It is THE solution to your zit problems.

Buy us. Try us. And thank us later. 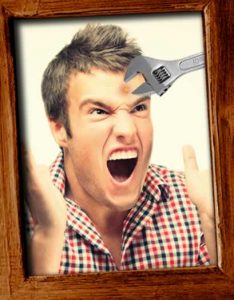 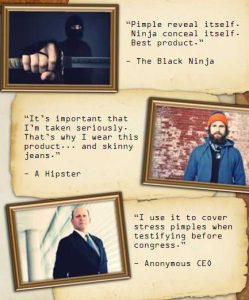